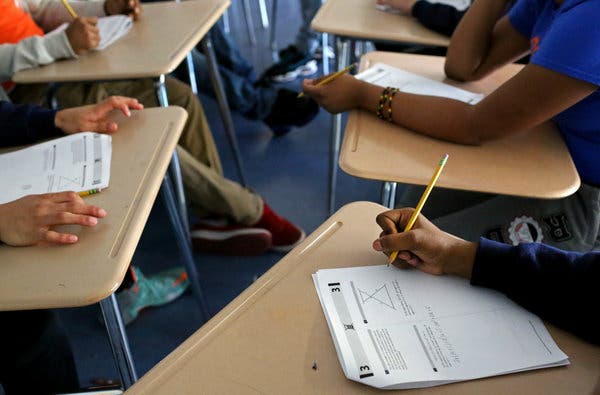 The SAT, the college entrance test taken by about two millions students a year, is adding an “adversity score” to the test results that is intended to help admissions officers account for factors like educational or socioeconomic disadvantage that may depress students’ scores, the College Board, the company that administers the test, said Thursday.

Colleges have long been concerned with scoring patterns on the SAT that seem unfavorable to certain racial and economic groups — higher scores have been found to correlate with the student coming from a higher-income family, having better-educated parents, and being white or Asian rather than black or Hispanic.

David Coleman, chief executive of the College Board, has described a trial version of the tool, which has been field-tested by 50 colleges, in recent interviews. The plan to roll it out officially, to 150 schools this year and more broadly in 2020, was first reported by The Wall Street Journal.

The adversity score would be a number between 1 and 100, with an average student receiving a 50. It would be calculated using 15 factors, like the relative quality of the student’s high school and the crime rate and poverty level of the student’s home neighborhood. The score would not be reported to the student, only to college officials.

Admissions officers have struggled for years to find ways of gauging the hardships that students have had to overcome, and to predict which students will do well in college despite lower test scores.

“We’ve got to admit the truth, that wealth inequality has progressed to such a degree that it isn’t fair to look at test scores alone,” Mr. Coleman recently told The Associated Press. “You must look at them in context of the adversity students face.”

The new tool could potentially give colleges a way of doing that. But at the same time, it could invite a backlash from more affluent, white and Asian families and from students who do well on the test and worry that their adversity score will put them at a disadvantage.

The plan comes at a time when universities like Harvard, Yale, the University of North Carolina at Chapel Hill and the University of Texas at Austin face challenges to their affirmative action policies, either in the courts or through federal investigations. Many admissions officers are preparing for the possibility that a newly conservative Supreme Court could take a hard line on the use of race in admissions decisions. The College Board says race is not factored into adversity scores.

To address concerns about the fairness of standardized tests, a growing number of colleges have made it optional rather than mandatory for applicants to submit scores from the SAT or the other main standardized entrance test, the ACT.

The reputation of the SAT test has been tarnished recently by the college admissions cheating scandal, which led to criminal charges against more than 50 people, including the actresses Felicity Huffman and Laurie Loughlin. Prosecutors said the defendants took part in a fraudulent scheme to get children into coveted universities like the University of Southern California, Yale and Stanford.

Federal prosecutors said the scheme, led by a charismatic admissions consultant, included tactics like obtaining phony certifications of disability so that students could take the SAT alone with extra time, paying off a test proctor to change test answers afterward, and in some cases paying a ringer to take the whole test for a student.